Two of the buckets were doing well. They had over eight inches of sap each. But the third was in bad shape. It had barely an inch of sap in the bucket, and this was from our largest maple tree. What had gone wrong?

Last week I wrote about tapping three maples in my backyard to collect sap for syrup. I figured it’d be a neat activity for the kids with a tasty, tangible benefit. Things I do rarely go off without a hitch on the first try, so I was pleasantly surprised when I had all three trees tapped—with six-year-old in tow—in under twenty minutes. We walked tall with our success as the penny sized puddles of sap grew in the bottom of the buckets. 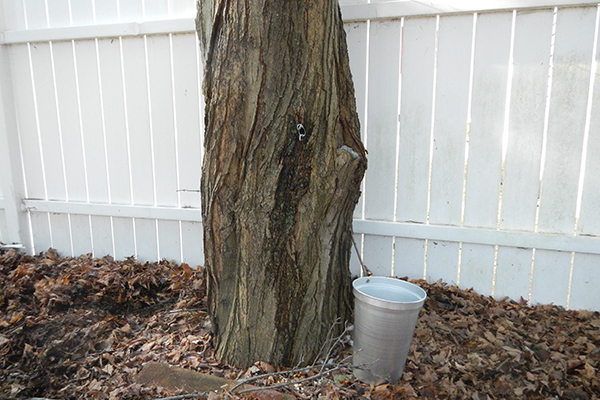 The next morning Andy had his boots and snow pants on seconds after finishing breakfast (waffles and maple syrup of course). We swaggered through the gate, confident we’d see our sweet gains from the previous day.

That’s when we found our missing “hitch” from yesterday. Two of the buckets were doing well. They had over eight inches of sap each. But the third was in bad shape. It had barely an inch of sap in the bucket, and this was from our largest maple tree.

What had gone wrong? Looking closer, I saw a key symptom: a wet curtain of sap slowly rolling down the bark. I gently loosened the tap with a hammer and peered into the hole. Had some shavings been left behind and clogged the tap? A quick exploration with a clean Q-tip ruled that out, but it revealed a crust of frozen sap.

As I slid the tap back into the hole, I realized the problem. In my haste the previous day, I had drilled the hole in a deep furrow between two thick plates of bark. As a result, the bucket hook was preventing the tap from seating firmly in the hole.

I trimmed some bark with the claw of my hammer to try and make more room for the tap, but sap still leaked. Next I gently nudged the thin steel tap with the hammer. No change. A firm hit. Nothing.

Exasperated, my efforts devolved into sharp whacks on the tap. The metal bent in a mirror of my frustration. 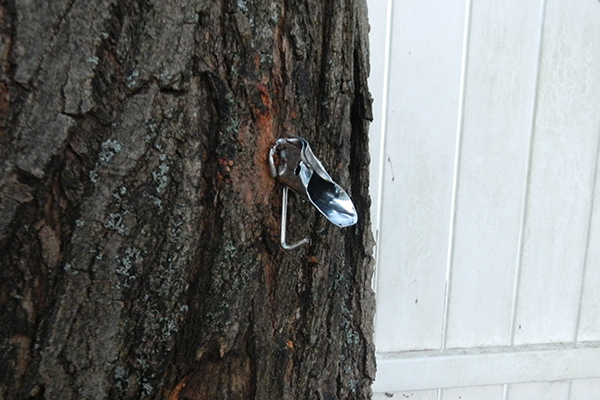 Finally, the sap flowed through the tap in a steady series of drips, one each second. I’ve had good sap flow since.

As I reflected on my experience, though, I remembered advice from the instructions. Don’t force the tap too deep. You risk splitting the bark, making it harder for the tree to heal. I may have just extended what should be a two or three year healing process to five years. It may not heal at all.

I still feel bad about the unnecessary damage to the tree. But I keep reminding myself: this is my first season tapping trees. Mistakes are bound to happen. That’s how you learn.

Spring Is on the Way

I learned a ton of lessons by the close of my first maple tapping season. Some came from the advi...

I decided to tap three maples behind my house this year. I figured since my kids can’t do without...