On a warm autumn day last year I noticed a few small, pretty beetles crawling around the base of a large tree at Hilltop Hanover Farm. The beetles were a shiny red with black dots on their shells, not unlike the invasive Asian lady beetles I’m used to seeing at work. Those are incredibly common in my office, and probably most of your homes, too; you may have seen some crawling around your windows on mild winter days. I even wrote a separate blog about them that you can read here. The bugs I saw that afternoon, however, didn’t look quite like Asian lady beetles- they were missing that characteristic black “M” on a white background on their heads. Curious, and unsure of what they were, I decided I’d come back on a different day with a field guide to figure it out. I had hopes that they were a native type of ladybug, which is something I’d never seen before.

Foolishly, I didn’t take any pictures, and soon after that day we were hit with a cold spell that sent most of the insect world into hiding. Some bugs will still brave the cold, like snow fleas, but the red beetles I saw were nowhere to be found once the temperatures dropped. I’d have to wait and see if they came back in the spring.

While writing and researching my other ladybug blog this past winter, I learned about the Lost Ladybug Project. This non-profit organization is a citizen science endeavor created by researchers at Cornell. On their website, lostladybug.org, they have helpful resources like a field guide for finding and identifying native ladybug species. There’s also a section on their site where you can submit photos of native ladybugs you’ve found using the forms here as a way of helping to monitor their populations. I made a note to remember the website so I could send in the results of my search later on.

Finally, on a warm day in March, I decided to check back on the tree in hopes that the sun had coaxed the beetles out of hiding. Fortunately for me, it had. And this time I made sure to take photos of the critters, not only for better ID purposes, but so I could share them with the Lost Ladybug Project. 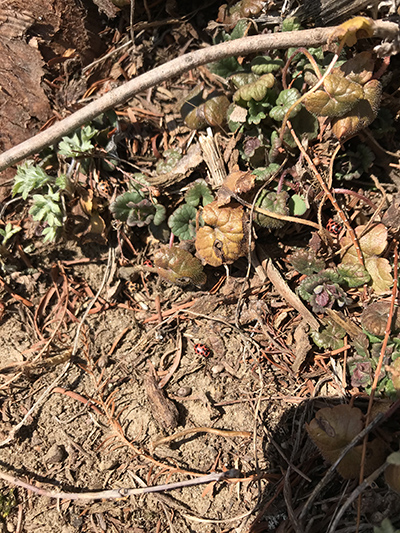 How many beetles can you find hiding in this photo?

A quick comparison between the beetles I found and the field guide I downloaded showed me that they were a type of native ladybug: the pink spotted. For me, this was a really exciting find. I had never seen a native ladybug and I was beginning to wonder if there just weren’t any more of them in this area to even be found. After spending all winter with Asian ladybeetles buzzing around my office, it was hard to hold out hope that there was any room left for other populations. This is because natives and invasives compete for food, but invasive species have no natural predators in their introduced habitat, so their numbers can quickly get out of control. 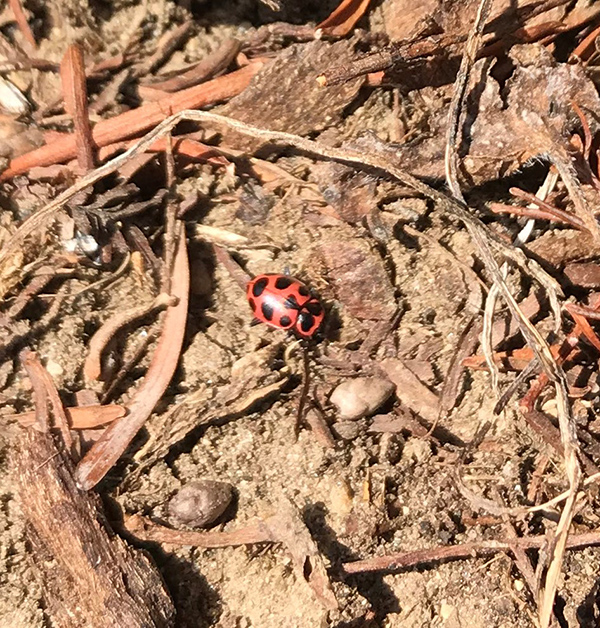 An up-close shot of one of the pink spotted lady bugs.

The discovery of the pink spotted ladybug was a happy surprise to me, but it also makes sense that I saw them where I did. If it’s to be found anywhere, a farm with a pollinator garden is a good place to start looking. Pink spotted ladybugs can eat both pollen and several different kinds of crop pests, like aphids, so a space like Hilltop Hanover provides them with plenty of food options. If you’re on the hunt for native ladybugs, check out similar habitats near you. Or bring the bugs closer to home by learning more about how to help pollinators here. If you find anything (and even if you don’t, a fruitless search is still a valid data collection outcome!) remember to submit your results and photos to the Lost Ladybug Project.

Please Login or Register to leave a review.
Login/Register